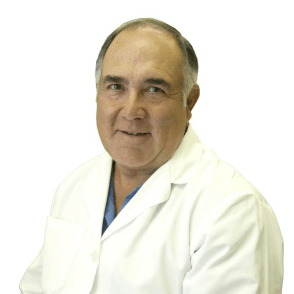 Dr. Frank Dominguez received his undergraduate degree from Southeastern Oklahoma State University in 1977. He went on to complete dental school at Washington University where he received his Doctor of Dental Medicine (DMD) in 1981.

Dr. Dominguez worked in public health as a dentist for three years in Santa Rosa, New Mexico. He also had a private practice in Grants, New Mexico for 15 years. He joined PERFECT TEETH™ in 1999 when he was ready to practice dentistry without the initial startup costs associated with a private practice. This move gave him the ability to focus solely on patient care while living close to his children and wife as they attended college and law school.

When not practicing dentistry, Dr. Dominguez enjoys spending time with his family which includes his grandchildren. Both his wife and son are attorneys, his daughter is a dental hygienist and his other son is a private investigator. He also enjoys spending his free time playing golf. What you may not know about Dr. Dominguez is that he played basketball in college where he was all-conference player and an honorable mention for All-American.

We look forward to introducing you to Dr. Frank Dominguez!